More than 500 homes in Lockport and Newfane were without power Tuesday afternoon after a tree trimming crew working for New York State Electric & Gas caused a large branch to snap and fall on a 14,000 volt primary transmission line on Clinton Street, near Vine Street.

The line also caused the crews bucket truck to catch fire, destroying the vehicle. No injuries were reported.

The Lockport Fire Department was called to the scene, but was not immediately able to fight the fire due to the high voltage line, according to Assistant Chief Patrick Costello.

“We had to wait until NYSEG crews arrived and shut off power to the line,” Costello said.

Lockport Police Chief Lawrence M. Eggert said the resulting fire, which began with the tires, spread to the truck, including wood in the truck’s wood chipper and caused it to burn.

Costello said firefighters were able to get the fire under control about 3:45 p.m., about 90 minutes after it was reported. Several NYSEG trucks remained at the scene attempting to restore power and remove the truck.

Police closed Clinton Street, between North Adam Street and Lake Avenue, pending the clean up of the 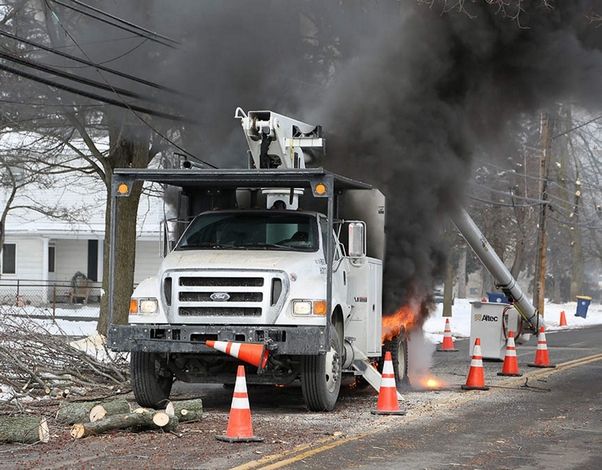