Got a job today to a duplex cuz an electrician says we had a bad neutral. I go there and a nice little ol'lady lives there. She said her first alert acts up, here electric range on medium actually got to hot and almost caught the pan on fire in two minutes, some lights work then not, and a few other issues but nothin that jumped up and said bad neutral? So I hooked up the super-beast on her urd srvc at the meter and dumped all 80 amps on it (after I pulled the meter of course!

) and it moved 2 volts barely! I then tonged the neutral leg of the super beast with it at 40 amps only and I got about 37 amps and then after the alligator connection of the beast on to the srvc neutral I got about 27 amps. With the beast at 40 and 80 amps I tonged all 3 legs of the srvc and got 0 amps!

I called the electrician and told him we were good and he still insists it's a bad neutral on our side cuz he says anytime you tong a "neutral" and get a reading it's bad???

I disagreed politely with him to no avail? Am I missing something or does he need to hit the books again? 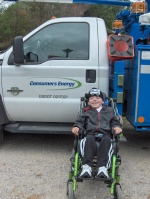 Damn I would love a 80 amp super beast. If you used it on the meter channel and only got a two volt swing, I would say its in the panel. Could you clip into the load side of the neutral in the channel. Sometimes thats the lug that goes bad

topgroove wrote:Damn I would love a 80 amp super beast. If you used it on the meter channel and only got a two volt swing, I would say its in the panel. Could you clip into the load side of the neutral in the channel. Sometimes thats the lug that goes bad

Yes I could but I won't (even though it's hooked directly to our side) because of company policies! We are allowed to do very little on a customer's side (if we want) and hooking a piece of our test equipment with the capability of doin more damage to the customers stuff would be a no-no in my mind! I assume you mean separate our neutral going back from theirs to test their grounds? I stop at the meter and I would think a qualified electrician could do that but I would think that same qualified electrician would know how and what our srvc neutrals are for??

Mike, in the URD meter channel you have the line side lugs. two hotlegs and the neutral and on the load side, two hotlegs and the neutral. sometimes oxidation builds up underneath that load side neutral lug. Its really hard to see sometimes. Just looking at it you'ld swear it was fine. If you plug in the superbeast with the nuetral alligator clip hooked on to the line side neutral it wont show a problem. I'm in people's basements all the time poking around.

Uh what the hell are ya'll calling tongue a neutral?

thats when you put the clamp around all three conductors. You should read zero if its good.

That's new to me. Forgive my stupidity so it's time now to inject me with some knowledge.

On a single phase service you clamp your amp meter on 2 hot legs and a neutral at the same time and it's going to show 0 if all is well?

Unless I'm missing something here I have never seen nor heard of anyone doing anything like that. Please elaborate.

Oh with the mega beast; that's a big sum biitch to lug around in your truck. I have to keep mine on the passenger side floorboard because I don't have a big enough bin with the room to store that thing--at least in my current setup (WHICH SHOULD CHANGE ANY GIVEN DAY NOW [smokey bear

We don't do that here either, I had to ask in chat what tounge all three meant too!

Tongue is what's in yo mouth. Tong is what he's speaking of.

If you had a balanced single phase load and tonged all three wires your reading would be zero and with no indication of the condition of the neutral. Don't make an all encompassing statement.